Translations of this page:
characters:sakura 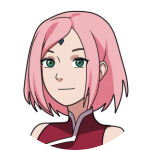 Sakura is the second girl to be trained by us. According to the plot, we (the MC) initially came to the village to train Sakura, but during a conversation with the Hokage, it was decided that we should train first Ino.

During the day she works in the Hospital.

At the evening she is at home. In the Sakura's branch we will have to go through a trial process, to prove to Sakura that we are strong enough to train her. During that approval process, in the afternoon she will come to the River to train with us (the MC).

Except where otherwise noted, content on this wiki is licensed under the following license: CC Attribution-Share Alike 4.0 International