Translations of this page:
walkthrough:tenten

Tenten's route opens after completing Ino's quests and the first date with Sakura.

After the date, you'll see an “emergency case” option when talking to Sakura in the hospital. That will activate the Tenten's branch.

Talk to Sakura and go to the forest to look for a flower called “Fuchsia”. You fail to find it so go home to sleep.

Next day go to the Ino's store. She says that Tenten may have the flower. Go to the Tenten's store. However, it's closed and there's a note on the door saying that she's at the training grounds.

Go to the forest and there you'll find Tenten at the meadow if you turn left. Talk to her and go home to sleep. 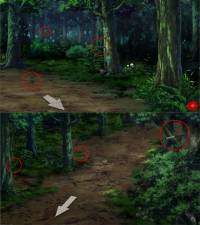 Next day go back to the forest and collect kunais and shurikens. Bring 5 kunais and 8 shurikens over to Tenten's to advance the story.

Enjoy the wondefrul animation with Tenten at the training grounds and after that you'll get the flower, Fuchsia. The flower must be given to Sakura.

Next day go to the forest and you'll meet there Karin that holds two vases. You tell her that this vases was stolen from Tenten's shop and offer her to re-buy it. Karin agrees, give vases to you and says that she will be waiting for the money in the Ichiraku. After that go to the meadow to find the Tenten and give vases to her.

At the evening go to the Ichiraku, where Teuchi will give you the note from Karin. Go to the training ground and rest for a few hours until Ino comes. If you promised Ino an extra training before, there will a sex scene.

You'll notice that someone have spying on you so you run after the spy. The chase will finish in the forest by the lake. There will be 3 ninjas that you have to fight. If you do something wrong, you will be beaten and Tenten's branch will be failed.

Fight in the forest

Later in the evening go to the Ichiraku, talk to its owner who will give you a note from Karin. After dinner go to the training fileds, hang out there for a few hours until Ino comes. You promised her a training, sex scene will follow.

You notice that you’re being watched, run after the spies. Once you catch up with them you find yourself surrounded by three ninjas in the forest nearby a lake. There will be a series of choices you have to make, fail once and MC will be beaten down and Tenten’s branch will be closed for you. Right order of choices: Bluff – Start a conversation – Create clones – Keep talking – Try to evade – Use a wrestle move

Next day go to the Tenten’s shop, tell her about the fight in the forest and ask her to teach you to seal things into the scroll (Sealing technique). Once you master the technique go to the Hokage.

Spot Kakashi enjoying the view at Shizune’s underwear while she’s picking up the documents. Help Kakashi to get off the hook and ask him to assist you in search of the thieves. Hokage writes an order for Hinata telling to help you at any cost and also gives you 3000 Ryo so you can hire guards. Keep persuading Kakashi to write a similar order for Tenten so that she’ll start training with you. When a choice pops up, click at Forgive me, after what Hokage will do what you want from him.

Once you’ve finished business at Hokage’s residence, head to the Ichiraku. You’ll meet Karin with a scroll lying on the nearby table. During dinner a strong wind will blow causing power to go out. In that turmoil, you take Karin’s scroll and she takes Hinata’s order.

Walk Karin to the hideout and give her money for the vases. You realize that you took the wrong scroll only when you’re home, you decide to deal with it tomorrow.

Open Karin’s scroll in the morning. As it turns out, the scroll tells about a ninja called Suika from the hidden waterfall. Even though the scroll is damaged you manage to make out a few techniques that Suika used to use. Including Spider Summoning technique. Go ahead and summon the spider.

Persuade him to make a contract with you (a new location Skrettek’s cave will open for you) after what Tenten will knock at your door. Dispel the technique and let her in. Talk to her, give her the order from Hokage and arrange a meeting at Ichiraku later today.

Then head to the training fields where you can practice at new techniques, such as Red Spider Technique, Spider Summoning technique, and Soshory Jutsu Technique. The last technique comes from a scroll you found a long time ago at street but never quite managed to use it. Go to the Ichiraku and give the scroll with techniques to Tenten.

Next day you see flashbacks with Karin and remember about the Buyer called Horune for he might have other things belonging to Tenten. However, first you need to go to the school and tell Hinata about the Kakashi’s order.

Upon leaving the school you bump into Karin, exchange your scrolls. Then you can go back to school and give the order to Hinata or leave it for yourself, it’s up to you. Catch up with Karin near the hideout and ask her where you can find the buyer. Every once in three days he appears at Ichiraku late in the evening.

Next day go to Tenten.

First tell Tenten about your plan of action for catching the thieves. Then go to the Hokage and fill him in as well. After that return to Tenten.

Then you need to buy goods for sale. You can do this at Shady in Ichiraku Ramen. We buy each product (at least 1 piece) and distribute them to the stores.

The next day we go to Kakashi, say that everything is ready for the sale, and set the day of the sale for tomorrow. The Hokage sends us to Shizune, where we can choose one of the techniques:

At the moment, the choice does not affect anything, perhaps this will change in the future.

On the day of the sale, we go shopping and distribute walkie-talkies to sellers. We follow the plot and eventually defeat the thieves, but we ourselves end up in the hospital.

A few days later we were discharged and Ten-Ten escorted us home. We agree with Ten-Ten to take a walk in the evening.

In the evening we go for a walk from Ten-Ten to the river, then to Ichiraku, and then home.

We sleep at home in bed, Ino comes the next morning and promises to clean up our house during the day. Ino leaves and Ten-Ten immediately arrives. We go for a walk with her and return home in the evening. She will change clothes and a choice will appear:

Now the choice does not affect anything, in the future this may change.

Ten-Ten falls, we try to catch her, everything flows onto the bed, but then a knock at the door - Ino came. Ten-Ten escapes, we hang out with Ino and end the day with sex.

After sex, Ten-Ten leaves, and we pass out there until the evening. We wake up and go to look for mushrooms. We come across Karin (in an uncomfortable situation), she knocks us out. At home, Ten-Ten is already waking us up, we agree with her for training.

The next day we go to the meadow and train with Tenten. After training, she will offer to go to the lake. We go with her. She swims, we sit on the shore. After, we watch the scene and go home.

Sleep at home. Shizune visits us next morning and tells that Tenten is missing and probably kidnapped. Maybe to the Arena.

Go to Karin and ask her about ths Arena. Then visin Mei at the Guest house (second floor) and ask her.

More in next updates

Except where otherwise noted, content on this wiki is licensed under the following license: CC Attribution-Share Alike 4.0 International